Due to the different types and designs, the following content refers to typical final drives used in chain-driven construction machinery.

These usually consist of a hydraulic motor and a flange-mounted planetary gear.

The basic principle can be described as follows:
The final drive is integrated into the existing hydraulic circuit and supplied with hydraulic oil. The system pressure present in the circuit, which varies depending on the machine, moves in a range from approx. 180 to approx. 350 bar.

If we look at the hydraulic motor of the final drive, its main task is to convert hydraulic energy into mechanical work and ultimately into a rotary motion. 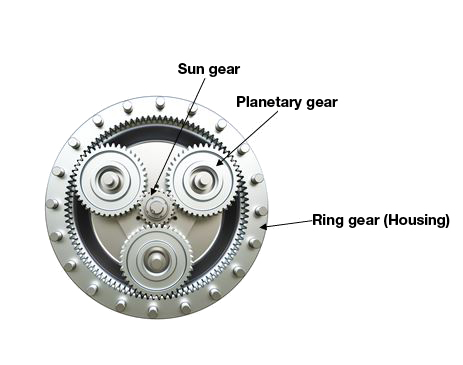 Furthermore, there are multi-stage planetary gears. These gears are often designed in a way that several sun gears with different pitch diameters (number of teeth) are available while the internal toothing of the ring gear remains the same. Depending on the desired speed or torque at the ring gear (housing), the respective sun gear is engaged.

In this context, assuming a constant internal toothing or constant size of the ring gear – the larger the respective sun gear is, the smaller are its rotating planetary gears and the smaller is the factor of the transmission ratio.